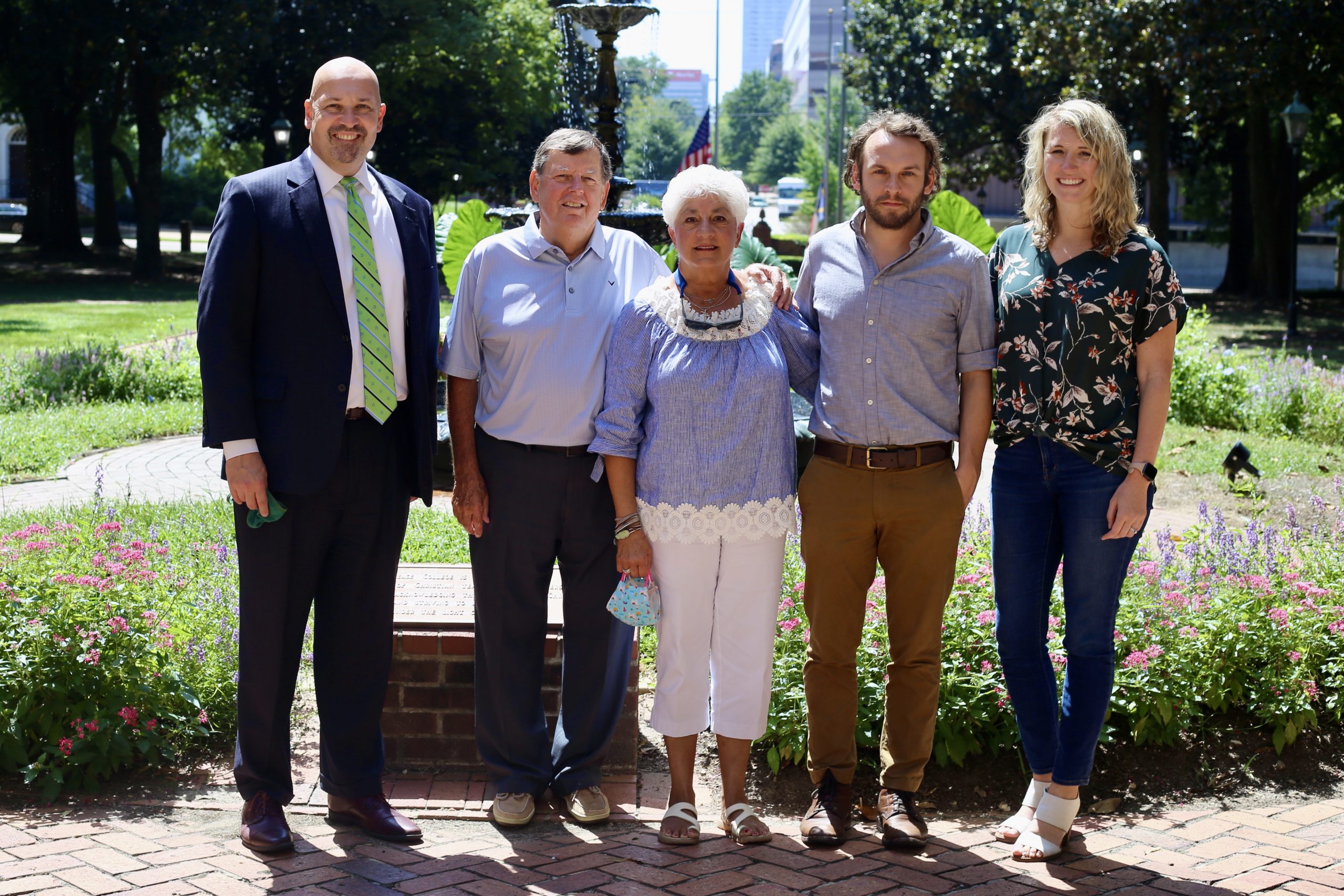 Leigh Anne Sims Ivey ’12 — a daughter, a wife, a friend, a Peace alumna, and a coworker — how does one start to tell the story of who she was?

Is it by her appearance? She had chocolate brown hair, timeless style, and a warm smile.

Is it by her personality? Seemingly quiet at first, when she opened up to someone she could be hilarious. She was thoughtful, compassionate, smart, and was full of adoration for her Schnoodle, Frankie.

Or, is it by her work? A talented Senior UX Designer at Red Hat, Inc, she traveled the world for her job. She had an eye for design and was loved by her coworkers.

But, words can’t quite capture who she was. And now, Leigh Anne isn’t here to share her story. 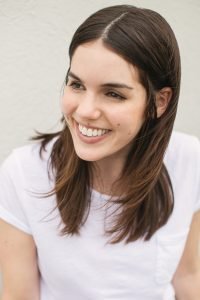 A Legacy at William Peace University

In January 2021, Leigh Anne passed away at age 34 suddenly from a brain aneurysm rupture. “Her life was cut short”, Celia Sims, Leigh Anne’s mom, said. “Leigh Anne had become a successful and confident graphic design artist who was compassionate about those around her.”

Her family, friends, and extended family want her legacy and memory to live on.

To do just that, they courageously established the Leigh Anne Sims Ivey ’12 Scholarship Fund in Fall 2021 at WPU. The scholarship is designated for a junior or senior that is majoring in visual arts or a design-related field to ease their financial need.

The student should contribute to the WPU campus and surrounding communities through kindness and compassion, like Leigh Anne did. Although not a specific criterion of this scholarship award, the Leigh Anne’s family and friends intended to recognize and support students who, like Leigh Anne, have a passion for learning and using their talents to give back and pay it forward to those around them.

“Our hope in establishing this memorial scholarship is that we keep Leigh Anne’s memory alive. It will help to lessen the financial worry for a deserving student at WPU,” Sims said. “Her desire to complete her degree program to ensure she would acquire the best possible job opportunity in her chosen field is what she would want for all students. She genuinely cared for others.”

Sims explained that WPU was where Leigh Anne first found her confidence — she found herself at Peace. The scholarship is a way to help others find the confidence Leigh Anne found through the campus community and her classes.

Leigh Anne first attended Peace in 2004; however, she felt unsure about what she wanted to study. After a photography class piqued her interest, she then transferred to Randolph Community College. She soon discovered she preferred the design aspect. Realizing how much she missed Raleigh, she enrolled in Wake Technical Community College to complete an associate degree in graphic design.

After two years of working in the field, Leigh Anne wanted to further her knowledge and career opportunities through a bachelor’s degree. She was drawn back to Peace. “It was at Peace that she was able to prosper and be all she could be,” Celia said.

Leigh Anne was proud to have been welcomed back and quickly dedicated herself to her studies — she was serious about being a successful designer after graduating. When she graduated, she worked first at Ansibel, and then advanced to the role of Senior UX Designer at Red Hat, Inc.

“Realizing her full potential was made possible by all of her professors, instructors, and friends at Peace,” Sims said. “She was so very proud to have graduated from her first choice.”

Caroline “Cary” Allman Schmid ‘08, Vice President at McKeeman Communications, was the one who first suggested Leigh Anne go to Peace.

Schmid grew up with Leigh Anne — they were neighbors, classmates, and bus buddies. In middle and high school, they bonded over a love of music and their unique sense of humor. They filled their teenage years with sleepovers, watching bad horror flicks and sneaking off to music shows.

Before high school graduation, Schmid suggested that they go to Peace together and be suitemates. That first year they spent their time exploring Raleigh, studying and watching reality TV together.

Even after Peace, their friendship continued to grow. “She was the only person I could spend an hour on the phone with,” Schmid said. They still went to concerts together, had movie nights, porch happy hours and always laughed a lot.

Leigh Anne would often text Schmid pictures of outfit ensembles asking for advice or if the style was too much. “She was an amazing dresser with fashion-forward, yet always classic outfits,” Schmid said. “She had a drive to continue to define her aesthetic in multiple aspects of her life.”

Leigh Anne wanted to use her style skills for others. She donated her time to Dress for Success, a not-for-profit organization that empowers women through support, professional attire and development tools. After her passing, Leigh Anne’s clothes were donated to the nonprofit. Outside of her volunteerism, she would use her design skills to make programs or unique presents for others. She genuinely cared for those around her.

“I still struggle with her being gone today — Her death came out of nowhere. I can’t go back and listen to her voicemails,” Schmid said. “When she passed, she was finally coming into her own.”

Leigh Anne’s husband, Richard “Rich” Ivey had seen Leigh Anne open up a lot since he first met her. He met Leigh Anne when she was 21 after two friends “set them up.”

Shy at first, he explained that when you got to know her, she was hilarious and caring.  “I thought she was way out of my league. When we started talking, though, it was nice and easy. We quickly became attached and inseparable,” Ivey said. He and Leigh Anne were married in 2013.

Leigh Anne was just one of those people that took a while to open up. If you did get to know her, you would learn about the snow globe she collected from each place she visited, or about how her devoted Schnoodle, Frankie, followed her to many of these destinations. Leigh Anne was adventurous, hiking on the weekends and spending New Year’s Eve in a new place each year.

One of the things that stood out about Leigh Anne was her style — she kept up with designers and would travel to fashion exhibits. “She had style for days and was always the best-dressed person in the room,” Ivey said. “The thing is, even though she was always dressed to the nines, Leigh Anne hated attention and hated having her picture taken. It’s funny how that all worked out.”

Her love of style wove into her creative side. She was a talented designer who always went the extra mile to do her work. In fact, it seemed to Ivey that at every stage of life, Leigh Anne had some sort of internal drive pushing her to do better.

“She always wanted to outdo herself and see how far she could go, I didn’t understand how she could be so driven,” he said. “She was kind and funny and smart and beautiful and hard-working and way too humble to admit a single one of those things.”

Caring for her Colleagues

A Senior UX Designer at Red Hat, Inc., Leigh Anne worked at the company for five years. After her death, her coworkers compiled a presentation filled with more than 40 quotes to show a glimpse of the impact Leigh Anne had there.

The PowerPoint hoped to share the mark Leigh Anne’s presence made in the company and the lives of those that worked there. Her colleagues described her as kind, funny, and deeply caring to those around her.

“She proved herself to be generous, thoughtful, insightful, genuine, and hilariously witty. There was no subject that was off-limits just like there was no task too large or too small for her to confront with her considerable talents. She lived the best of what we should all aspire to be,” said colleague Scott Sellers. “She made me feel at home and drove me to be better through her relentless pursuit of excellence and caring about others. I will forever hear that laugh echo in my head and marvel at the size of her heart.”

Colleague Gretchen Miller explained she noticed that Leigh Anne carried herself with confidence and grace at work. “She knew herself and what she wanted. She was determined, diligent and embodied the ideal characteristics of a teammate,” Miller said. “In the days and years to come, I will remember her with a deep sense of gratitude as she was a pinnacle example of the kind of person I want to be.”

Many of her colleagues noticed how Leigh Anne always went out her way to show appreciation and genuine care for them.

“More than anything, what stood out to me is that if you did anything, even the smallest thing, to help her out in any way, she would make you feel like you just made a huge difference,” said Ruben Moreno, a colleague of Leigh Anne at Red Hat, Inc. “She was always ready with an enthusiastic, genuine thank you and a smile.”

Instilling Confidence in Others

While Lochlyn Gamble ’23 never met Leigh Anne, Gamble is the first to be impacted by Leigh Anne’s legacy. Gamble, a communications major with a focus in graphic design, has a similar story to Leigh Anne’s. He started out his college career with a different degree and was unsure of his passion but found it in design.

In a previous semester, he dropped out of classes early due to difficulties from the pandemic and finances. However, the Leigh Anne Sims Ivey ’12 Scholarship made the decision to come back to campus so much easier.

“I would like to thank Leigh Anne’s family and friends for helping this transition and making this decision so much easier. Without the scholarship, I wouldn’t be here finishing my education right now,” Gamble said. “It means so much that I can keep learning and that I can help keep her memory alive.”

Peace has helped Gamble find who he is and build his confidence. The support of faculty and staff have helped Gamble through several difficult semesters and given him the confidence needed to persevere.

“If I had to share one thing I learned at Peace, it would be having confidence in myself. I was never the most confident in my work, I would always hesitate to show it,” Gamble said. “But now, after working so closely with the professors and other students, I learned that there’s nothing to be afraid of. You’ll only move forward if you have the confidence to do so.” 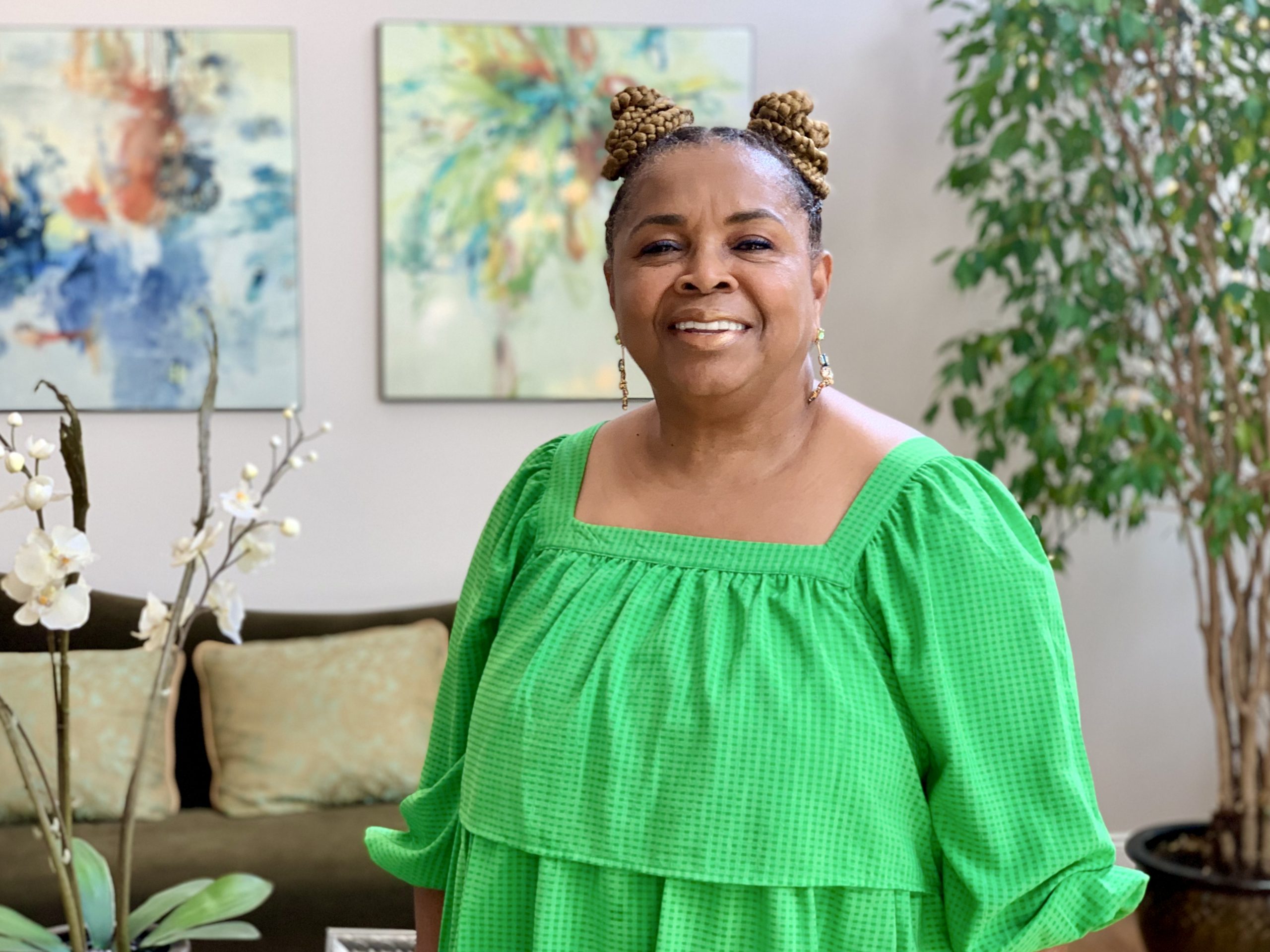