William Peace University is committed to providing an inclusive and welcoming environment for all members of our community.

We deeply value people. Our campus and culture are enriched by people of different backgrounds and perspectives working and learning together, invigorated by open dialogue in an atmosphere built on respect. We welcome, expect, and encourage the continued pursuit of everything necessary to build an increasingly inclusive community.

When we refer to diversity we include ethnicity, race, age gender (identity & expression), ability, and religion, country of origin and veteran’s status. We also define diversity to include people with a range of philosophical and societal perspectives, socio-economic backgrounds and cultural backgrounds.

The office has a programmatic focus on the needs and topics of minority students including students who identify as members of  marginalized groups or identities such as LGBTQIA+, first generation college students, women, international students, African American, Latinx/Hispanic, Asian, Native American, Pacific Islander, etc.

We provide opportunities and initiatives for those who seek multicultural awareness, cultural competency, inclusive leadership training, greater capacity for equity and celebration of diversity.

We work with students, faculty and staff actively engaging in knowledge acquisition (curricular) enhancement, celebration and empowerment (co-curricular) programs related to our intersecting identities as a campus community.

We do this through training, programs, and other special events that strengthen our inclusive campus community and by engaging in intentional, identity-focused empowerment and leadership initiatives. Through these initiatives, we serve as a place for support and affirmation of the diversity in our student body. 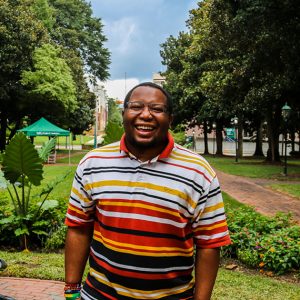 “No matter what color, what race you are, you can share your story here. And we will love you for who you are.”
Zyon Ross
Student, Theatre major

Director of the Office of Diversity, Equity, and Inclusion

The Office of Diversity, Equity, and Inclusion supports students by hosting culturally affirming celebratory events, facilitating educational workshops for students, faculty, and staff, and through our service and advocacy efforts for the WPU and local communities.

We deeply value people. Our campus and culture are enriched by people of different backgrounds and perspectives working and learning together, invigorated by open dialogue in an atmosphere built on respect. We welcome, expect, and encourage the continued pursuit of everything necessary to build an increasingly inclusive community.

When we refer to diversity we include ethnicity, race, age gender (identity & expression), ability, and religion, country of origin and veteran’s status. We also define diversity to include people with a range of philosophical and societal perspectives, socio-economic backgrounds and cultural backgrounds.

The student body is a microcosm of the diversity in our state. With each student sub-population having differing needs, our role is to advocate for those needs and support all students. Currently, the Office of Diversity, Equity, and Inclusion hosts events and creates workshops during the following months:

Safe Zone programs are nationally recognized training programs for institutions committed to having inclusive educational environments and more specifically, are committed to supporting LGBTQ+ students. Research in both K-12 and postsecondary education has reported that students who identify as LGBTQ+ often report feeling unsafe, isolated, and even invisible or marginalized. Safe Zone training is hosted at least once a semester by our office and all WPU staff and faculty are encouraged to complete it.

Every semester, the Office of Diversity, Equity and Inclusion creates a book club for all in the WPU community. Students, faculty, staff, and alumni who register for the semester will receive a copy of the selected reading, access to the book club digital meeting space, and other goodies to support reading engagement. The goal of our book club program is to introduce members to multicultural lived experiences through an intersectional lens of ability, gender, race, ethnicity, socioeconomic status, religious beliefs, etc. Book club meets regularly throughout to reflect on the current novel. Examples of previous readings are listed below:

We email everyone in the WPU community regularly about book club registration. Registration typically opens up a few months before the first meeting for the semester. Please check your peace email later this summer for information regarding Fall 2022 book club.

The Diversity Educators Engaging Peace (DEEP) Program is a diversity, equity, inclusion, and social justice peer education program for WPU students. Student leaders who serve in the DEEP Program are known as DEEP Leaders. DEEP Leaders are ambassadors for the Office of Diversity, Equity, and Inclusion. They provide leadership in the planning and execution of the campus-wide programming and workshops oriented toward their fellow students.

William Peace University is committed to the pursuit of inclusive excellence; our mission for ethical citizenship drives our inclusion efforts.

Our university values provide support for our efforts but also affirm an institutional commitment diversity & inclusion. As part of a multi-faceted effort to maintain an inclusive environment and foster community, WPU has a team of faculty and staff to respond to bias when it occurs on our campus, educate the community on what bias is and ways to prevent it, and provide support for our community members impacted by bias or bias incidents. This is the Bias Education and Support Team (BEST).

Our work on bias reporting and education will help us actualize our university values for diversity and community. BEST has a guiding philosophy that is based on educating and supporting the campus, allowing any punitive steps (as necessary) to be taken by our current student conduct or human resource process.

What is a Bias Incident?

Incidents when a person determines that they’ve been targeted and/or treated unfairly because of actual or perceived aspects of their identities or characteristics of those identities.

Including but not limited to, conduct/behavior, slurs, unequal or discriminatory treatment/service, graffiti, written messages, or images that harass or intimidate individuals or groups based on membership in protected classes and/or other marginalized/minority identities. It should also be noted that a bias incident or act can occur whether the act is intentional or unintentional.

How would this differ from a hate crime?

In North Carolina, a hate crime is defined as any act prohibited by law that is motivated because of the victim’s race, color, religion, nationality, or country of origin. Each act of bias that is reported will be reviewed/judged, and appropriate action steps taken on a case-by-case basis. As such, it should be noted that not all acts of bias are going to require a response from BEST. It should also be noted that not all bias incidents will be found as hate crimes, while all hate crimes are (more severe) acts of bias.

What happens after I submit a BEST form?

The university’s response to bias incident reports may vary depending upon factors such as effect(s) on the campus community, the nature or severity of the report, whether the violator and the reporter have been identified, etc. General procedural steps are outlined below:
All reported bias incidents will first go to the BEST Intermediary, who will determine if, in fact, there was a bias incident and, if so, share the report with the entire team (in only some cases).

William Peace University students are encouraged to report bias when/if it occurs. We encourage students to report an act of bias even if they see it/or experience it as a bystander.

The DEI offices hosts a variety of on-campus and virtual events for WPU students, faculty, and staff. Students can check PacerEngage for those event details. Faculty and staff will receive emails and regular updates about events as well as calendar invites. If you have questions about an event, please contact us.

William Peace University does not discriminate on the basis of gender, race, creed, color, national origin, religion, sexual orientation, age, disability or veteran’s status in the recruitment and admission of any student. This nondiscriminatory policy also applies to all the rights, privileges, programs and activities generally accorded or made available to students at the university and to the administrators, faculty and staff and to the administration of educational policies, admissions policies, scholarship and loan programs, and athletic and other school-administered programs.